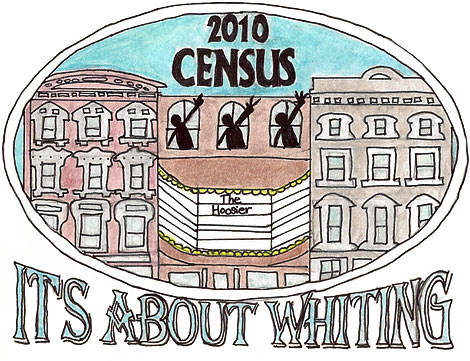 Welcome to the Whiting Census 2010!

In every decade since these words were written, the US government has fulfilled the mandate to enumerate all those who live in our nation.  This page has been created as a resource to find information related to the Census. It contains timely help for those who have questions about the current Census and figures from past Whiting Censuses.

Our goal is 100% participation in Census 2010. We need your help in achieving this goal. To prepare for Census Day (April 1st, 2010), here are some things you should know:

The Census is Important

Congressional apportionment, federal tax subsidies, school entitlement programs, public health service provisions and private business decisions are all based on Census data.  Every single person, regardless of status, is to complete the Census.

In Whiting, completing the Questionnaire translates into approximately $32,000 per household of federal monies. These dollars are used by our public schools to fund various programs (including the hot lunch program) and by the municipal city to fund infrastructure projects (sidewalks, etc.). Census data is used to qualify for other types of grant programming that benefit all of us. Because these funding streams are crucial to the ongoing success of the community, it is important that you complete the Census Questionnaire when it arrives by mail in mid-March.

The Census is Safe

Whiting is a safe community, and our active participation in one another’s lives keeps it that way. If you see someone suspicious in the neighborhood, call the police. If a person claiming to be a Census employee knocks on your door, don’t open it. Talk through the glass. Ask to see identification—Census officials will carry an federal ID badge and a letter stating their business. Dial 9-1-1 immediately if you are suspicious of the person. Never let a stranger in your home—Census workers should never ask to come in. Never provide your social security number to anyone. Never respond to an e-mail inquiry or telephone call regarding the Census.

The Census is Easy

The Census 2010 Questionnaire is among the shortest in our nation’s 220 years of enumeration. This should make it the easiest any of us has ever seen. Designed to take between 5 and 10 minutes to complete, a sample form can be viewed here:

Forms are mailed to every dwelling and should be mailed back by April 1st (or shortly thereafter). If you need help completing a form, the Census Bureau will have a Question Assistance Center located at the Community Center. Additional forms in English/Spanish translations will be available at City Hall, the Community Center, the Library, the School Administration Building, and various churches. A complete list of these “Be Counted” sites will be available here when the Questionnaires are physically in place.

The Census is Fun?

We’re doing our best to make it that way! To encourage awareness of the Census and engage as many people as possible, the Chamber of Commerce is hosting a “Guess How Many People in Whiting” raffle contest. This is a bigger, better version of wondering how many jelly beans are in the jar.

The Chamber of Commerce office is located at 1417-119th Street.

» Select demographic characteristics for Whiting’s 1990 and 2000 Census can be found here.

» An archive of WRite Stuff Articles that have focused on the Whiting’s activities relating to Census 2010 can be found here: